This sketch was drawn for a production of The Winter's Tale, produced at La Mama, etc. in January 2005, under the name of Mamillus (Leontes and Hermione's only son, through the eyes of whom this production was configured).

Mamillius the little boy-narrator of this nightmarish tale of a father's jealousy and a mother's death, also played the character of time, and that of the rogue Autolycus. The design of the show was inspired by fairy tale and children's books illustrations.

In this sketch, the character of Time operates a transition from the cold, checkered floor world of Sicilia, to the lush greenery of Bohemia. In keeping with the set designer's aesthetic choices for the two places, I imagined a long tailcoat whose train, in a sweeping turn, could help dynamically operate the scene change.

For budgetary reasons, most of these large-scale ideas could not be realized. 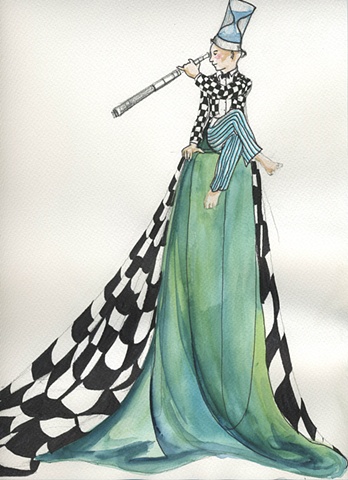 Time, of The Winter's Tale
< previous