Director Alec Wild Sets Takeshi Kata Lights Marcus Doshi Sound Josh Horvath In this production, XVth century silhouettes were abstracted to their essence. I eliminated virtually all patterns, ornaments and intricate details, which allowed me to create strong sculptural shapes that evolved geometrically in a streamlined stage of black, underlined with gold. Just as Tak Kata's black panels would occasionally reveal a vertical stream of red, so the characters' outlines would cut bright and sharp silhouettes against the set. In order to achieve this geometry of clothes, I paired the XVth century research with the tailoring work of Charles James.

Within this general esthetic, I had to emphasize the essential conflict of the play: that between two kings, and the worldviews that they stand for. I found the imagery for this dichotomy readily available in the lexical fields attached to the two characters: when Richard is paired with the image of a golden sun shining, then setting down, Bolingbroke and his army are associated with the hardness of metal: "Bolingbroke hath pressed to lift shrewd steel against our golden crown". Richard and his court evolve in a world of contemplative hedonism, and poetry. For their clothes, I chose soft silk velvets in warm and golden tones. Bolingbroke and his followers are governed by an ethic of efficiency and action: their costumes had the cold and utilitarian tones of steel. For them, I chose heavier velveteen and shimmery zibeline, in grey and silver tones, that would evoke effectively the descent of warfare steel over the lushness of Richard's excesses. In keeping with the streamlined, metaphorical esthetic of the production, I chose a minimal approach to the war costumes: instead of reproducing metal armor, I created doublets made of the same fabrics as each character's civil costume, which were heavily boned to harden the silhouettes: each "armor" became the symbol of warfare, not an illustration of it. The pattern of the boning, which varied from character to character, was inspired by actual armor structures. Metal and leather buckles, broad swords in sword belts completed the hardening of the body, as an instrument in the machine of war. By contrast, Richard's war look had the unpractical beauty and frailty of parade armor. 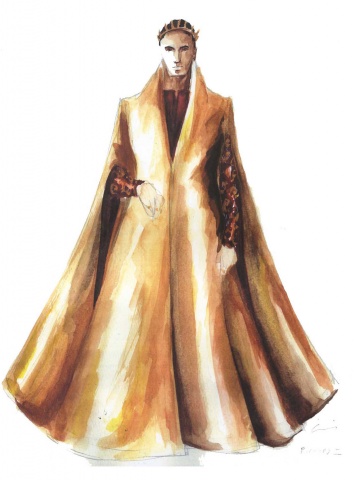 Richard in his gold robe
< previous next >